Now while he stands tough
Notice that this man did not have his hands up
The Free World got you gased up
Now who's afraid of teh big bad wolf ?

This guy ain't no mother-fuckin' MC
I know everything he's got to say againtsme,
I am white, I am a fuckin' bum, I do live in a trailer with my mom,
My boy Future is an uncle Tom
I do got a dumb friend named Cheddar Bob, who shoots himself in the leg with his own gun
I did get jumped by all 6 of you chumps
And Wink did fuck my girl
I'm still standin' here and screamin' "FUCK THE FREE WORLD"
Don't ever try to judge me dude
You don't know what the fuck i've been through

But i know something about you,
You went to Cranbrook, that's a private school
what's the matter dawg ? You embarrassed?
This guy's a gangster ? He's real name's Clarence !

And Clarence lives at home with both parents
And Clarence's parents have a real good marriage
This guy don't wanna battle, he's shook
Cause there no such things as half-way crooks
He's scared to death
He's scared to look in his fuckin' yearbook, fuck Cranbrook!

Fuck the beat, I go acapella
Fuck a Papa Doc, fuck a clock, fuck a trailer, fuck everybody
Fuck y'all if you doubt me
I'm a piece of fuckin' white trash, I say it proudly
And fuck this battle, I don't wanna win, I'm outty,
Here, tell these people something they don't know about me. 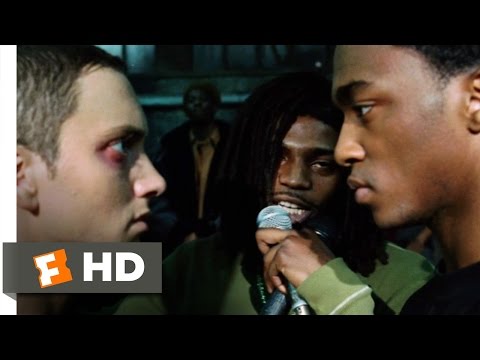